Our ghouls have noticed you have an adblocker active.
While we hate ads too, our website isnt cheap to run. Please consider unblocking our website, refreshing the page and clicking on an ad so we can keep the ghouls fed and the servers on :)

Our amazing show cast! (in no particular order) 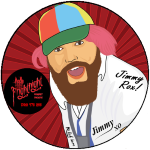 Scott comes from an international career in live scare theatre in the UK, a stilt walker at Luna Park Sydney, Interactive live audiences are his speciality.
Having performed in countless musicals, some of his favourites to recall were Professor Callaghan in Legally Blonde, Curly in Oklahoma and Linus Van Pelt in You're A Good Man Charlie Brown.
Scott previously performed for Frightnight as Eddy The Undertaker and Jimmy Frightnight. 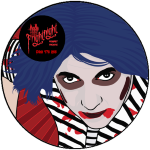 Danny has extensive professional entertainment experience, including lead vocals and lead roles in numerous cover bands, musicals, and cruise ships. He was a featured singer/dancer at Wonderland for 5 years, and has been a featured actor in TV shows, including Home And Away

Richard first dabbled in the comedy “scene” as an auctioneer, and has conducted a multitude of celebrity auctions including charity events for cancer foundations, the Bushfire Appeal – and even a gig with Michael Bolton (he is especially proud of that one!)

Jessica began her career as a screen actor with many film and television credits to her name. She then transitioned to stage, studying across Australia and the US in musical theatre. She has hosted many live shows for major Children's brands at events including Carols By Candlelight, AFL matches and New Years Eve Celebrations across Australia. She has also toured with the Rocky Horror Tribute Show playing the role of Columbia (who may make an appearance in Frightnight)

Rebecca completed her Certificate III in Performing Arts at Brent Street Studios Full time course. She has since experienced classes at the renowned Broadway Dance Centre and taken workshops with world class choreographers. Rebecca was a cheerleader for the Parramatta Eels in 2013 and more recently a performer in the rocky horror show. Her career highlight to date is performing as a backup dancer for Kelly Clarkson at the 2011 NRL Grand Final. Rebecca has performed extensively throughout the NSW club circuit, appeared in several Film clips and in the TV series “UnderBelly”. Her theatre credits include “The Boy from Oz”, “Spamalot”, “West Side Story” and "The Producers". Rebecca also works and has a passion for teaching dance and performing arts at The Performance Studio. Rebecca has been a performer at fright night for 8 years now and loves to entertain and make people laugh with the Frightnight gang. 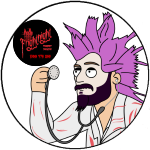 Mike is the technical guy at Frightnight, joining the crew in 2016. He says he's been around sound and lighting equipment since he was 14 and he loves to make people laugh. He does live sound and lighting engineering, AV, vocals and crowd warming. Mike also owns Munro Entertainment, a partner in frightnight that takes care of everything technical, from the stage equipment and props to the website and social media.
2017 saw the introduction of Mike's character "Doc" behind the show's controll desk.

Rob Griffiths as Timmy
"Laughter is contagious… Smile and the world will smile with you!" Rob is the brain child behind Frightnight Comedy Theatre Restaurant and began his career as an Industrial Design Engineer, where he won many awards for his extraordinary skills.

Chris Francis as Jo Kerr
The man behind such wonderful characters as Jo-Kerr and Tommy (Timmy’s cousin!) grew up in Tasmania where (so he tells us) all the boys and girls have two heads. He discovered his love for performing at an early age.

get the latest news